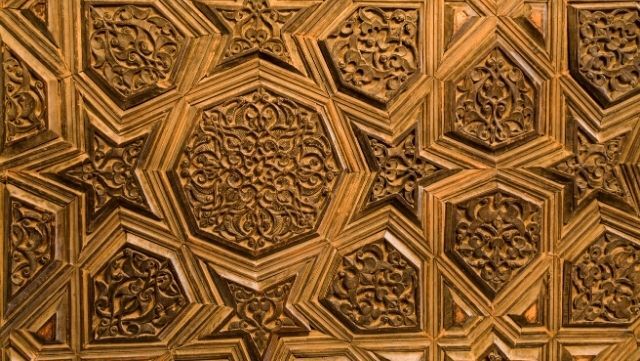 What Is Kundekari Technique, How To Make Woodwork Art, What Is Origin?

The word künde means a large and thick tree trunk.

The origin of the word Kündekari comes from Ottoman Turkish and it means holding and understanding. Kündekari, which is a decorative art of joinery, is a decoration technique made by interlocking geometrical pieces of small sizes. The term mother-of-pearl is also used for Kündekari. Kundekari making is done by simply intertwining small wooden pieces cut in geometric shapes such as pentagon, octagon, and star, without any glue or screws, and at the end of this, level surfaces are obtained. The most well-known tool used in the art of kündekari is a planer or a planer. The reason for the emergence of this art is based on technical reasons. Thanks to Kündekari, warping, bending, and warping due to moisture and heat change in wooden boards are prevented.

Kundekari art was developed in Aleppo, Egypt, and Anatolia during the Anatolian Seljuk period. Oak, walnut, ebony, and rose trees were mostly preferred in the production of kündekari. Oak, ash, and iroko trees, which are resistant to harsh weather conditions, are generally used outdoors, while walnut, cherry, boxwood, and pear trees are used indoors.

Kundekari art, which has been one of the traditional arts since the Seljuk period, has a wide area in the field of architecture. It appears in many places such as door and window sashes, window cages, ceiling decorations, cabinet doors, beams, railings, and railings. Kündekari motifs are also common in the religious field. Konya Alaaddin mosque pulpit is one of the most beautiful examples of this art. It is known as one of the most elegant kündekari motifs of the Seljuk period. The mosque has undergone many restorations until today, but the pulpit, decorated with kündekari technique, still stands in its original form. Sivrihisar Great Mosque, Aksaray Ulu Mosque, Malatya Great Mosque, Harput Sere Hatun Mosque and Siirt Ulu Mosque minbars are also examples of Anatolian kundekari. Embossed kundekari is the closest to genuine kundekari and requires a serious craftsmanship.

Kundekari, which has lost its former popularity due to the loss of its former value and developing technology, is used both in the civil and religious fields today, although it is not intense. Like some other arts, this branch of art is also preserved and continued in Konya.

One of the places where Kundekari motifs are seen most frequently are the doors, the kündekari door features a stylish and aesthetic appearance on the doors of the mosques. Kundekari, which is called three-dimensional art, is also known as the advanced level of carving art.

People who deal with the art of kundekari are called kundekar, in other words, they can be defined as the master who created the art of künde. Today, some masters protect and maintain this art, which they inherited from their ancestors.