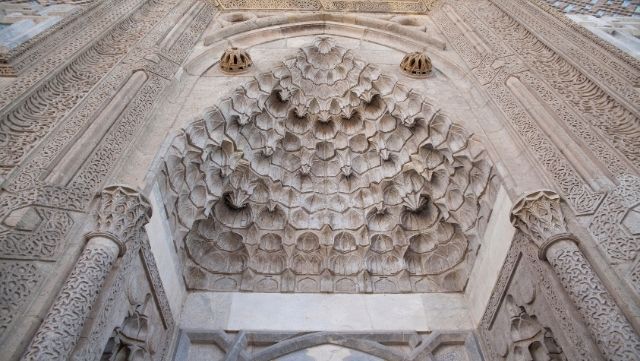 What does muqarnas mean?

Muqarnas is an ornamentation and transition element applied in Islamic architecture. The muqarnas, which is a transition and filling element that provides a three-dimensional image, is an architectural art element that fills the inner parts of the semi-domes with its honeycomb shape. It is the name given to prismatic corbels made of small stones or bricks to pass from an inner part to an outer surface and from a lower surface to an upper surface. The second name of muqarnas is called stalactite. Muqarnas pronunciation seems difficult but actually, it is the same as it is written.

While muqarnas gives an image stacked in the form of a honeycomb array of cells, it undertakes the carrier and decoration functions at the same time, which makes it different from other backgrounds. It occurs as a result of shaping plaster or wood materials by carving. Another way of being is that it emerges in the natural process during architectural construction.

Muqarnas technique evokes peace and awe in its environment. From this point of view, it resembles the mandalas in the Buddhist belief. Because in mandala art, geometric shapes are also in question, and when they come together, they create a shadow harmony and symmetry, just like in muqarnas, which creates a kind of meditation effect on human beings. The muqarnas technique has great importance and place in religious ornaments and decorations. This technique has added a lot of value in the field of Islamic decoration.

Muqarnas can often be seen on flat surfaces and crown doors, mihrab quarters, transition elements, and balconies. In the architectural field, it becomes an ornamental and carrying element according to the console or arch-style elements. Muqarnas can be formed in horizontal or vertical positions, for example, they are located on the inner faces of the domes, where they grasp the column heads. In summary, the muqarnas technique, having a soft and fluid texture when transitioning from one surface to another, provides comfort in turns and transitions. Thanks to these superiorities, it has given Islamic architects strength and success in the past. The muqarnas technique is considered to be one of the wonders of Islamic architecture.

Muqarnas is an element that can be produced with wood, brick, tile, and stone materials. It is claimed that the first stalactite seen in history was seen in a mosque minaret in Cairo, Egypt. On the one hand, it is thought that it emerged in Egypt in the 11th century and spread from there to Central Asia, on the other hand, it is accepted that it was Baghdad and its surroundings. Geometric shapes and the effects of light on them cause muqarnas to create a three-dimensional perception. It is frequently used in muqarnas, mausoleums, mosques, palaces, and cupolas, which are used as visual and carrier elements. Muqarnas represent the harmony of prismatic shapes.

Muqarnas design is still being used. There is a big Muqarnas Tower building project in Saudi Arabia. The building's facade was inspired by a traditional “muqarnas” vaulting technique that results in multiple corner offices while providing shade.