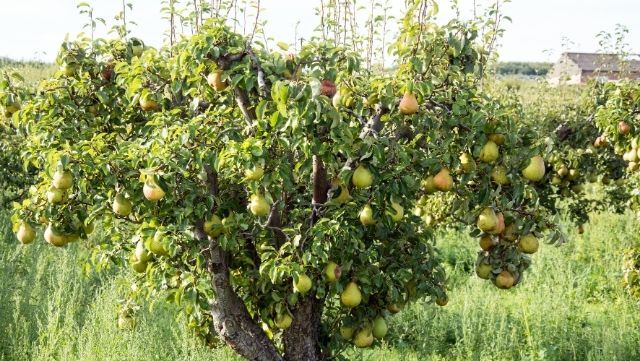 When And How To Prune Pear Trees, What Are Its Diseases?

What are the pear tree properties?

The pear tree is a type of tree that has a distinctive shape and pear fruit grows. It is a tree belonging to the Rosaceae family. In early spring, it blooms with visually beautiful white flowers similar to wild roses. The flower of the pear tree has a very beautiful appearance.

The pear tree has a hard, dense texture and woody structure. This tree shrinks a lot during drying and also changes shape.

Peartree yields fruit harvest for two seasons, in summer and winter. The pulpy, stone pear, the fruit of the pear tree, is harvested in June and late autumn.

Peartree can reach up to 15 meters in height, there are twenty different types. A pear tree is known to yield high amounts of fruit from the age of 4 to 6 years.

Where does the pear tree grow, when should it be planted?

Peartree mostly prefers cold weather conditions, but it does not need a very special climate and soil. This tree, whose homeland is Anatolian soil, can grow almost everywhere in our country. However, the fact that the soil to be grown is rich in minerals will make the fruit more delicious. Peartree planting time varies depending on the climate. It is more suitable to be planted in the early spring in cold regions and the autumn season in hot regions.

The pear tree is versatile, its fruit is eaten directly on the table, pear jam and marmalade are made, the juice is drunk and it is also used in making liquor.

Apart from its fruit, the tree itself also has areas of use, its red-colored timber is frequently used in the wood industry, carpentry work, and furniture production. Pear tree timber is a type of wood that can be easily processed and has a very good polish. It is used in furniture production as wood veneer, it is widely used in turning works and hanging works.

Pear trees should be pruned vertically, as they are usually vertically growing, and pruning should be done carefully so as not to interfere with the growth of the tree. Young, non-fruiting trees are more suitable for pruning to determine the shape of the tree and increase fruit development. Apart from that, ripe pear trees are pruned to shape them, to ensure their ventilation and good access to sunlight, and their sick or dry branches are cleaned during pruning. A sick tree cannot bear good fruit.

As we mentioned, many pear tree varieties tend to grow vertically, they do not branch much. To stimulate the formation of side branches, cresting should be done at the minimum level.

Peartree pruning time is resting periods, it should never be pruned during the fruit developing period. Only voracious branches can be pruned immediately in any period, and should not be left on the tree. In general, the pruning period is from February to April. This can be called the earliest a few weeks after the last frost.

Pear tree diseases are a handful that is fairly frequent and easily identified. The worst of pear tree diseases is fire blight, which spreads quickly. It manifests as cankers that exude a creamy fluid on any or all sections of the tree, including blossoms and fruit. The region around the canker appears blackened or charred, hence the term. Fabraea leaf spot, leaf blight, and black spot are all names for a rash of brown and black spots that appear on leaves late in the summer and cause them to drop. The spots have the potential to spread to the fruit as well. Pear scab appears as soft black/green lesions on the fruit, leaves, and twigs that mature to gray and crack.Ornamental pear tree

Ornamental pear trees grow quickly, are resistant to most soil types, including heavy and poor soils, and available in a variety of forms and sizes to meet your landscape needs.

There are numerous types available, with the main distinction being their shape.

When we write about pear tree, a pear tree song comes to the mind which is called ''Partridge in a pear tree'' and also we remember a wonderful hotel called ‘’Pear tree farm’’